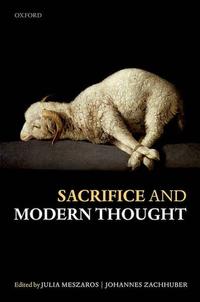 Sacrifice has always been central to the study of religion yet attempts to understand and assess the concept have usually been controversial. The present book, which is the result of several years of interdisciplinary collaboration, suggests that in many ways the fascination with sacrifice has its roots in modernity itself. Theological developments following the Reformation, the rediscovery of Greek tragedies, and the encounter with the practice of human sacrifice in the Americas triggered a complex and passionate debate in the sixteenth century which has never since abated. Contributors to this volume, leading experts from theology, anthropology, and literary and cultural studies, describe and discuss how this modern fascination for the topic of sacrifice has evolved, how it has shaped theological debate, the literary imagination, and anthropological theory. Individual chapters discuss in depth major theological trajectories, theories of sacrifice including those of Marcel Mauss and René Girard, and current feminist criticism. They engage with sacrifice in the context of religious and philosophical thought, works of literature and film. They explore different yet overlapping aspects of modernity's obsession with sacrifice. The book does not intend to impose a single narrative over all these diverse contributions but brings them into a conversation around a common centre.