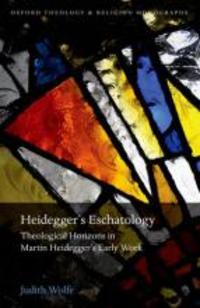 Heidegger's Eschatology is a ground-breaking account of Heidegger's early engagement with theology, from his beginnings as an anti-Modernist Catholic to his turn towards an undogmatic Protestantism and finally to a resolutely a-theistic philosophical method. The book centres on Heidegger's developing commitment to an eschatological vision, derived from theological sources but reshaped into a central resource for the development of an atheistic phenomenological account of human existence.

This vision originated in Heidegger's attempt, in the late 1910s, to formulate a phenomenology of religious life that would take seriously the inherent temporality of human existence. In this endeavour, Heidegger turned to two trends in Protestant scholarship: the discovery of eschatology as a central preoccupation of the Early Church by A. Schweitzer and the 'History of Doctrine' School, and the 'existential' eschatology of Karl Barth and Eduard Thurneysen, indebted to Kierkegaard, Dostoevsky, and Franz Overbeck.

His synthesis of such trends within a phenomenological framework (elaborated primarily via readings of Paul and Augustine in his lecture courses of 1921-2) led Heidegger to postulate an existential sense of eschatological unrest as the central characteristic of authentic Christian existence. His description of this expectant restlessness, however, was now inescapably at odds with its Christian sources, since Heidegger's commitment to a phenomenological description of the human situation led him to abstract the 'existential' experience of expectation from its traditional object: the 'blessed hope' for the Kingdom of God. Christian hope thus for Heidegger no longer constitutes, but rather negates 'eschatological' unrest, because such hope projects an end to that unrest, and thus to authentic existence itself. Against the Christian vision, Heidegger therefore develops a systematic 'eschatology without eschaton', paradigmatically expressed as 'being-unto-death'. Judith Wolfe tells the story of his re-conception of eschatology, using a wealth of primary and newly available original-language sources, and offering in-depth analysis of Heidegger's relationship to theological tradition and the theology of his time.